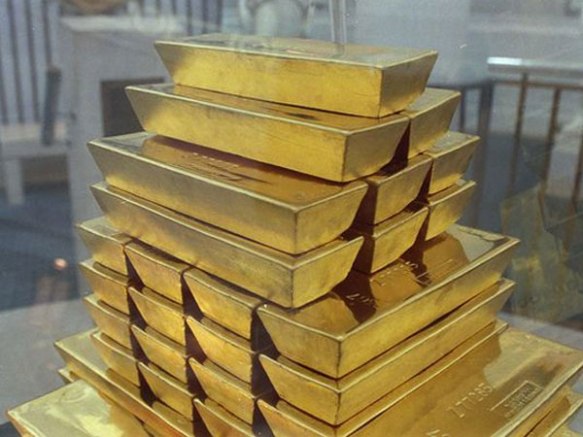 After getting a boost from trade-related tensions between the U.S. and China, one strategist says that gold has plenty of room to run due to other favorable factors. In an article on Kitco, this strategist says these include a buildup of U.S. debt and an aggressive fiscal policy by the Fed that could backfire and worsen the nation’s economic outlook.

Macroeconomic strategist and managing partner at Spotlight Group Stephen Pope outlined to Kitco how the landscape is shifting towards one that favors gold. The most conspicuous among the metal’s tailwinds is the expanding U.S. debt, which currently sits above $21 trillion.

According to the article, analysts have expressed concerns that the explosion of sovereign debt could soon become unmanageable, and Pope believes these warnings are a good omen for gold. The strong correlation between the yellow metal and U.S. debt will become even more significant as the country’s governing officials continue to borrow money.

Pope notes that, despite pressure to cut back on outstanding debt, the government finds itself in greater need of funds with each passing year. Thus far, the Department of Treasury exercised its power to raise the debt ceiling as needed, yet Pope warns that this quick fix can only take the nation’s economy so far.

With the U.S. Treasury announcing that it plans to borrow an additional $1 trillion this year, Pope wonders whether officials truly have a debt limit in mind. As the Federal Reserve winds down their QE program, the Treasury could find itself forced to increase yields exponentially in order to placate creditors.

Besides the looming threat of a default that goes along with such extraordinary debt levels, Pope expects gold to also benefit from the Fed’s agenda. Officials have shown little inclination towards a measured approach this year, with markets agreeing that three to four rate hikes this year can be expected.

Yet the ongoing tightening of monetary policy could soon claim its first victims, says Pope, as risk assets become less appealing with each successive hike. While this will serve to buoy gold as safe-haven assets become more attractive, Pope believes the Fed’s hawkish stance carries additional benefits for the metal.

Other than a government that has to pay more interest on its debt, the article states corporations and individuals will likewise be affected by a tighter borrowing environment. 2018 could see a string of corporate bankruptcies as rates go higher, which, according to Pope, could lead to a sudden spike in unemployment followed by a drop in property prices. He believes such a chain reaction would quickly lead to gold becoming the most desirable asset amid rapidly diminishing economic prospects.